Sri Lanka – the big choker in the finals

Reaching four Cricket world cup finals in a span of five years is a remarkable achievement for any cricket team and Sri Lanka deserves accolades for accomplishing it but not winning even one of them will definitely haunt them in the years to come.  They have been most consistent and most impressive team from the sub-continent in the recent past. It is harsh to call them chokers but it is also equally true that they failed to overcome the tremendous pressure that comes with the big finals and get past the last hurdle that would bring them a great glory. 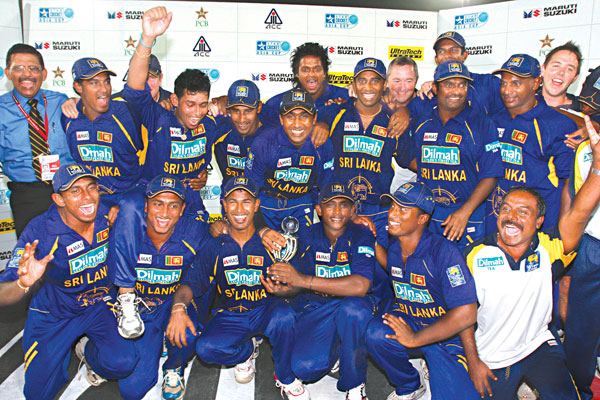 Let us review what happened in these four finals and where the Lankans went wrong.

It all started with the hammering in the hands of the Aussies , in the hands of Gilchrist to be more specific, at the Kensington oval.  The Aussies already won the last two World cups and were eager to complete a hat-trick.  They were on a roll but when you have players like Mahela , Sanga, Sanath and Murali  ,  you would not expect the team to lose in so crushing a manner as it actually did.

It was Gilchrist’s day who played one of the greatest innings in a WC final. When a player like him is in full flow and plays a hundred balls, he causes a great damage to the fielding team and that is what he did to Lanka then. Although the Lankans did not concede too many runs in the first ten overs ,  the failure to take early wickets gave Australia the license to go for the kill once they had a nice platform to launch a fierce attack.

In their reply , the Lankans scored more than 120 runs in the first twenty overs for the loss of just one wicket and had the stage set for a deadly attack on the Aussie bowlers. But, at least one of Sanga or Mahela, who both completed their half centuries , needed to cut loose in the way Gilly did after he got his eye in but that did not happen. And what happened later is a losing flurry of wickets in trying to catch up with the mounting run rate.

This time , the Lankans choked in what is famously known as the ‘Mecca of cricket.’  The Lankans had the explosive pair of Sanath and Dilshan to open the innings for them.  Dilshan was in roaring form in the tournament  and scored plenty of runs but his departure for a nought was a massive blow early on.   in the innings. Losing the first four wickets quickly with not many runs on the board forced the Lankans to curb the aggression.

Although Sanga played a beautiful knock and lent some respectability to the final total, the damage done in the early overs proved to be too much to make up for.  The Pakistanis followed a no non-sense approach and played freely to make sure that there were no major hiccups in their run chase.

The Lankans started too slowly but gradually picked up as the innings went on.  They plundered more than 80 runs in the last ten overs and had the momentum with them at the half way stage.  Slinger Malinga picked up the wickets of both the Indian openers and looked threatening in his first spell but in the end, it was quite not enough. This was the closest of all the finals but the result was again not in  favour of Lanka.

Having been in an indifferent form with the bat in the tournament,  MS Dhoni saved his best for the big occasion, just like Adam Gilchrist did in 2007. The out-of-form skipper bravely promoted himself ahead of Yuvi, who would later be the Man of the tournament, when they were chasing what could be termed as a challenging total. Till then, no team won the WC at home.  Captain Cool was facing a situation of enormous pressure and the odds were heavily stacked against him.

The men in blue would have been in deep waters had the Lankans removed the Indian skipper early.  But, they failed and MS succeeded. He finally made his mark in the tournament and handed the Lankans another heart-breaking loss . His spectacular knock also sent  Jayawardene’s silken century down the drain.

Having already lost three big finals, they had a great chance to improve their record by winning this year’s T20 title. They had a fabulous start to the final with their bowlers not only putting a lid on the run rate but also picking up wickets. They had West Indies in dire straits but Marlon Sammuels played a memorable innings to give the Windies  something to defend.

Halfway through the match, the Lankans were favourites in spite of Sammuel’s blitz. Their target was 138, exactly the same score which they failed to defend in 2009 T20 final against Pakistan. Contrast the Lankan approach with that of the Pakistanis and one can clearly understand why Lanka struggled where as Pak chased the same target easily . No doubt that they were different pitches, but Pakistani batsmen played their shots thus keeping the pressure on the opposition.   On the other hand, the Lankans followed an over cautious approach and paid a heavy price for it. Their plan was to keep wickets in tact were later part of the game and then press the foot on the accelerator but in the process, they let the run rate creep up to an alarming level and lost wickets in a heap.  This one is not only the latest but also the most royal of all the chokes.

Slinger  Malinga is Lanka’s most reliable bowler and his failure to produce a stellar performance in the last two finals hurt them very badly. It is an important reason for why the Lankans failed to clear the final hurdle. Dhoni in 2011 and Sammuels in 2012 toyed with Malinga’s bowling and if the team’s best bowler is not up to the mark, it will make the job harder for the fielding captain.

On most of these occasions,  Lanka’s best player in the tournament ,be it Dilshan in 2009 or Malinga in 2007 and 2012 failed to excel in the final encounter.

Dilshan brings a lot of aggression at the top of the order and the run rate will be high when he is on song. On the other hand, when he departs early, Sri Lanka often struggled to maintain a high run-rate, although Sanga and Mahela are excellent stroke players.

In all these tournaments, the Lankans were highly impressive all through but failed to outplay their opponents on the day when it mattered most. They were at times over cautious in their approach and brought themselves more trouble thus failing to accomplish one last win.

Today, Sri Lanka is heavily reliant on its  veteran trio comprising of  Mahela, Dilshan and Sanga who bat in the top three. Chandimal is the most promising young batsmen from Sri Lanka but he is no match to a Kohli or a Raina. It is a pointer to the lack of  explosive power in the middle order (There is  Angelo Mathews but he bats too low for his calibre). Players like Kandamby, Chamara Silva, Kapugedera failed to capitalize on the umpteen opportunities they got.  Not having enough firepower in the middle order might have  forced Sanga or Mahela to take the defensive route too early sometimes when it was not needed.

It is foolish to expect Mahela or Sanga to deliver every time they come to bat or to play forever and the new generation Lankan batsmen have to grab the opportunities with both hands.

It is hard for the Lankan players to overcome these losses but the key to that will be to show greater aggression. Going on the defensive chasing a small target or after losing an  early wicket will put the team on the back-foot. The Lankan batsmen needs to play freely without clogging their minds with over-defensive and pessimistic thoughts and exert pressure on the opponents right from the start.

Summary : If South Africa choke in the league stages and semis, the Lankans do so in the finals !!