MS Dhoni targets 2013 for the next ODI World Cup

MS Dhoni is one of the finest commanders in the modern day cricket who is leading the national squad in all three formats of the game. He judges all ups and downs of the ongoing encounter while wearing leather gloves, standing behind the three wooden sticks and makes abrupt decisions. He is an acrobatic wicket keeper and has the quality to craft his innings according to the situation. 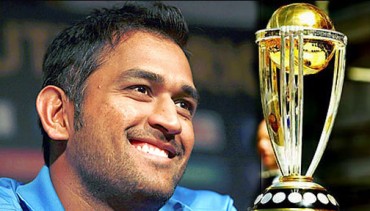 The 30-year-old recalls the happiest moments of his life when India won the ICC Cricket World Cup 2011, on April 2, 2011 at the famous Wankhede Stadium, Mumbai. That was a thrilling final played against Sri Lanka who set a comprehensive target of 275 runs for the home side to grab the title. Dhoni led the team from the front by thrashing unbeaten 91 runs off 79 deliveries which comprised two towering sixes and eight fours.

India won the match by smashing 277 runs for the loss of just four wickets with 10 balls to spare and he was declared ‘Player of the match’. The whole stadium was electrified when Dhoni dispatched a six over long on to Nuwan Kulasekara and won the trophy. He was hugged and lifted by his team mates as the tears were obvious from most of them. Dhoni could not control his emotions too and cried with joy in the dressing room. He narrated his expressions as,

“It’s very difficult to control an emotion like that. I was controlling it, quickly. I wanted to go up to the dressing room and I see two of my players crying and running onto me. Fortunately, all of a sudden, I started crying and I looked up and there was a huddle around me.”

India has won the inaugural ICC World Twenty20, at Johannesburg, on September 24, 2007, beating their arch rivals Pakistan by five runs under his leadership. He took over Indian Test Captaincy in 2008 and they ruled the world in the longest version of the game until the summer of 2011, when England took over from them.

The smart Captain took part in 196 One Day International, scored 6497 runs at an excellent average of 51.15, the best of unbeaten 183 runs with seven hundreds and 43 fifties. His skilful wicket keeping has earned him 187 catches and 61 stumpings in the limited form of cricket.

The inspirational leader has always proved his worth even in the tense situations of any match. India will be delighted if he can carry on until the ICC Cricket World Cup 2015, which will be held at Australia and New Zealand.

Dhoni would like to continue subject to his fitness and performance in the field and will decide to take part in the next ODI World Cup after couple of years. He commented,