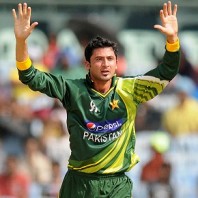 The young speedster of Pakistan, Junaid Khan destroyed the Indian top order batting and a century from Nasir Jamshed led the visitors to a convincing victory.

India was initially in trouble but a fine innings of MS Dhoni led them to 227 with four wickets in hand at the end of the scheduled 50 overs. Pakistan hammered 228 runs for the loss of just four wickets in 48.1 overs.

MS Dhoni (India) was declared ‘Player of the match’ for his outstanding unbeaten knock of 113 runs.

The first One Day International of the three match series was played on Sunday, December 30, 2012, at MA Chidambaram Stadium, Chepauk, Chennai.

Earlier, the captain of Pakistan, Misbah-Ul-Haq, won the toss and decided to bowl first keeping in view the overcast conditions and his bowling strength. The experienced openers of the Blue Shirts, Gautam Gambhir and Virender Sehwag, went in to bat as Mohammad Irfan started up with a maiden over. The next two overs produced 17 runs when Juanid Khan clean bowled Sehwag for four runs. Mohammad Irfan uprooted the stumps of Gambhir on the fourth ball of the fifth over for eight runs.

The lethal bowling from Junaid Khan continued in the next over when he destroyed the timbers of Virat Kohli and Yuvraj Singh for 0 and 2 runs respectively. India was reeling at 4-20 and miseries were multiplied when Rohit Sharma was smartly caught by Mohammad Hafeez off Junaid Khan for just four runs. The fifth wicket went down at 29 when the Indian skipper, MS Dhoni got together with Suresh Raina and they tried to stop the invasion of the Green Shirts. Repair work was started by the batsmen and the score board kept creeping as the boundaries were hard to find.

The fifty runs partnership was recorded on the first ball of the 23rd over when Raina hit a four to Saeed Ajmal. Dhoni was dropped on 16 by Misbah-Ul-Haq at midwicket off Mohammad Hafeez and the first hundred of the innings appeared on board in the 31st over. The batting powerplay was taken in the 33rd over and Mohammad Hafeez dislodged the stumps of Suresh Raina on the second delivery for 43 off 88 balls with 2 fours. The sixth wicket fell at 102 in 33.2 overs  as Ravichandran Ashwin walked in the centre. The batsmen added 10 runs in the 37th over as Dhoni hit the first six of the innings on a no ball from Junaid Khan two overs later.

MS Dhoni dispatched his 47th ODI fifty on the second ball of the 41st over with a four and the fifty of the partnership was attained in the 42nd over. Ashwin was assisting his captain nicely from the other end and kept on adding useful runs. The run rate picked up instantly and nine runs were added in the 46th over with a six from Dhoni followed by another nine in the next.

The pair completed the hundred runs partnership for the seventh wicket in the 49th over as MS Dhoni thrashed his 8th ODI century by hitting a six. That over from Mohammad Irfan was the most expensive of the innings since he gave away 21 runs with 1 six and 3 fours. MS Dhoni remained unbeaten for 113 off 125 deliveries with 3 huge sixes and 7 fours, Ravichandran Ashwin was at the other end at 31 as India scored 227 runs for the loss of six wickets. 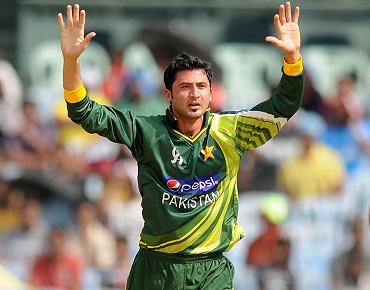 Junaid Khan was the chief destructor with four wickets whereas Mohammad Irfan and Mohammad Hafeez picked up one wicket each.

Pakistan had an awkward start when Mohammad Hafeez was clean bowled on the first ball of young Bhuvneshwar Kumar as Azhar Ali joined in with Nasir Jamshed. The Men in Blue bowled according to their line and length, the batsmen found it difficult to score the runs and they got just 21 runs after 10 overs. Azhar Ali was caught at midwicket off Kumar for nine runs on the second ball of the next over when Younis Khan replaced him.  The latter opened his account with a four and kept the score board running as Nasir Jamshed secured his end with valuable addition of the runs.

Younis Khan scored 11 runs in the 25th over with a couple of fours and the first hundred of the innings was displayed on the screen in the next over. Nasir Jamshed achieved his seventh ODI half century in the 28th over and Younis Khan punched his 48th fifty with a straight six off Suresh Raina in the 29th over. Nasir Jamshed also hit a six on the fifth ball of the same over and they enhanced the score to 133 in 30.3 overs when Younis Khan was gone for 58 off 60 with 1 six and 3 f ours. Misbah-Ul-Haq reached at the crease as Nasir Jamshed was dropped by Yuvraj Singh at point off Ashok Dinda on the first ball of the 33rd over at 68.

Misbah-Ul-Haq looked shaky and became the next victim at 172 at his personal feat of 16 from 24 with just one four.  The next batsman Shoaib Malik got a lucky break when he was caught behind by Dhoni off Ashwin at eight but it was declared no ball after review. The Green Shirts required 31 from the last 42 deliveries as the visitors reached 200 runs in the 44th over. Nasir Jamshed thrashed his second ODI hundred in ODI and that too against India in the 47th over and remained unbeaten for 101 off 132 balls with 1 six and 5 fours. Shoaib Malik secured his end with 34 off 35 with 3 fours as Pakistan piled up 228 runs with six wickets in hand and 11 balls to spare.

Bhuvneshwar Kumar was the top wicket taker with two whereas Ishant Sharma and Ashok Dinda shared one wicket each.

Pakistan clinched the match comprehensively with a huge margin of six wickets and leads the three match series 1-0.