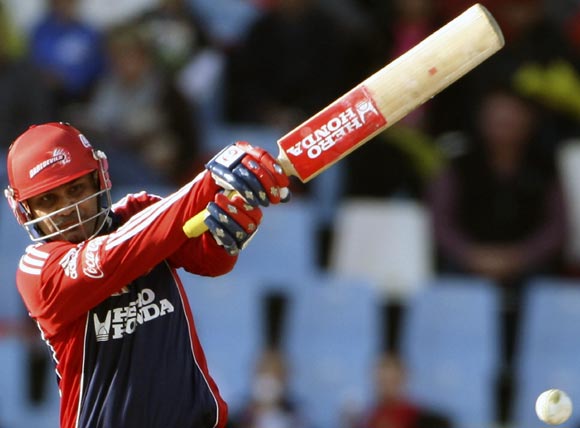 Delhi Daredevils maintained their top spot in the IPL 2012 while beating Pune Warriors as Virender Sehwag led them from the front with a heroic knock of 87 runs.

Pune Warriors scored 146 runs for the loss of two wickets in 20 overs and Delhi Daredevils attained the target by plundering 148 runs with 8 wickets in hand and 24 balls to spare.

Virender Sehwag (Delhi Daredevils) was declared ‘Player of the match’ for his outstanding burst of unbeaten 87 off just 48 balls.

The 31st match of the Indian Premier League was played on Tuesday, April 24, 2012 at Subrata Roy Sahara Stadium, Pune.

Earlier, Pune Warriors captain, Sourav Ganguly, won the toss, elected to bat in front of his home crowd and with a determination of posting a big total on board. The decision bounced back immediately when they lost two quick wickets of the attacking batsman, Jesse Ruder and Ganguly himself for mere one run. The home team was in dire trouble when Robin Uthappa joined with the other opener, Manish Pandey and they tried to stabilise the innings with odd boundaries.

Uthappa gathered 10 runs in the seventh over off Pawan Negi and Pandey survived on the second ball of the 9th over off Negi when he was dropped at long on by Kevin Pietersen for 21 runs. The runs rate was picked up by the duo and they took the score to 74 at the end of the 13th over as Pandey got another life at 44 runs when Shahbaz Nadeem let down a simple caught and bowled chance. He completed his half century on the fifth ball of the 15th over and became third time lucky on the fourth ball of the next over when Negi dropped him at his own bowling.

The run rate was accelerated by the two batsmen as Pandey got two fours in the 17th over and Uthappa followed him in the following over. Pune Warriors managed 146 runs with eight wickets in hand at the end of the allotted 20 overs. Manish Pandey was unbeaten for 80 off 56 balls with 3 huge sixes and 7 fours as Robin Uthappa was at the other end at 60 from 58 deliveries with 6 fours.

Irfan Pathan and Morney Morkel were the only bowlers who got some success by claiming one wicket each.

Delhi Daredevils opened the innings with Mahela Jayawardene and the skipper, Virender Sehwag as the first opted to attack and sent the ball out of the ropes once in every over. Jayawardene was unluckily run out for 18 on the fifth ball of the third over as the hard hitting Kevin Pietersen joined with Sehwag who accumulated 11 runs in the fourth over with a couple of fours.

The boundaries started flowing from the willow of Sehwag who added 11 runs in the fifth over with one six and a four. The following over produced 15 runs as Pietersen hit one six and a four and Sehwag shared with a four as well and achieved his fifty on the last ball of the 10th over. The second wicket partnership measured 89 runs in 8.2 overs when Kevin Pietersen was caught by Ryder off Rahul Sharma for 27 off 21 balls with two sixes and one four.

Virender Sehwag carried on with the firework and the rival bowlers were unable to stop the flow of runs. He achieved the target on the last ball of the 16th over by dispatching a six over long on and remained unbeaten for 87 off just 48 balls with 3 glorious sixes and 10 sweetly timed fours. Ross Taylor secured the other end with 9 runs as Delhi Daredevils smashed 148 runs with four overs to spare for the loss of just two wickets.

Points scored by two teams after the end of the 31st match of the IPL 2012: