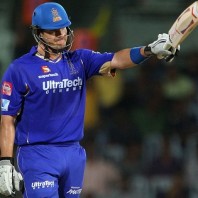 A 90 runs 2nd wicket partnership between Michael Hussey and Suresh Raina sealed the demise of Rajasthan Royals despite the first IPL 2013 ton by Shane Watson.

Rajasthan Royals thrashed 185 runs after losing just four wickets in the measured 20 overs while Chennai Super Kings hammered 186 with five wickets in hand and one ball to spare.

Michael Hussey (Chennai Super Kings) was declared ‘Player of the match’ for his match winning knock of 88 from 51 balls.

The 30th match of the Indian Premier League was played on Monday, April 22, 2013, at MA Chidambaram Stadium, Chepauk, Chennai.

Earlier, Rahul Dravid, the skipper of Rajastahan Royals, won the toss and sent Shane Watson along with Ajinkya Rahane to open the innings. Watson was the most fluent of the two and scored 18 runs in the first three overs with 1 six and 2 fours. He added 13 runs in the fifth over with 1 six and 1 four and completed his fifty on the 29th ball he faced with a grand six. The first wicket fell at 71 in 7.2 overs when Rahane was clean bowled by Ravichandran Ashwin for 16 as Watson continued with his onslaught. The next two incoming batsmen, Dishant Yagnik and Rahul Dravid scored just 7 and 6 runs respectively as Stuart Binny joined in with Watson. 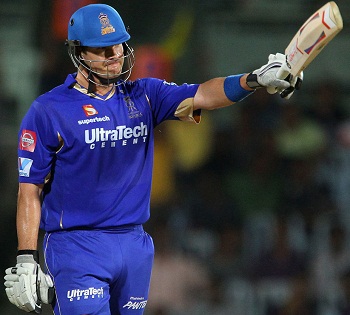 The run rate was picked up immensely by the two batsmen with the assistance of steamy boundaries. Shane Watson dispatched 2 sixes in the 17th over and plundered his hundred on the second ball of the next over. It was the first ton scored by a batsman in the ongoing IPL as Watson was caught by Michael Hussey at extra cover off Dwayne Bravo for 101 from 61 mere balls with 6 mighty sixes and even fours. Stuart Binny occupied his crease with 36 off 22 with 1 six and 3 fours as Rajasthan Royals powered 185 runs with six wickets in hand in 20 overs.

Ravichandran Ashwin and Dwayne Bravo were the only successful bowlers with two wickets each.

Michael Hussey took off excellently for Chennai Super Kings and scored 18 runs on 9 deliveries as his partner, Murali Vijay, was caught and bowled by Ajit Chandila for just three runs. The batsman in form, Suresh Raina, walked in next and hit 1 six and 5 fours along with Hussey in the following overs. The required run rate was kept under check and the pair was sending the ball out of the rope at will. The first hundred of the innings was posted on board in the 11th over and Michael Hussey also reached his fifty. Suresh Raina rushed to his half century in the next over and was going almost neck to neck with Hussey.

The second wicket association enhanced the score to 112 in 12.4 overs when Suresh Raina was held leg before wicket off James Faulkner for 51 from 35 deliveries with 2 lofty sixes and 4 fours. The captain of Chennai Super Kings, MS Dhoni, got together with Hussey who accumulated another 12 runs in the 14th over with a couple of fours. The chase was kept alive as Michael Hussey who knitted 3 boundaries two overs later but was unluckily run out for 88 off just 51 deliveries with 1 six and 13 fours.

The stumps of Ravindra Jadeja were shattered by James Faulkner for a duck and he was replaced by Dwayne Bravo as the hosts required 29 to win the match in 18 balls. Dhoni kept on stealing the runs from the other end and the two batsmen scored 18 runs from the next 11 balls. MS Dhoni became the third victim of Faulkner for 21 and the target was reduced to 11 from the last 6 deliveries. Bravo hit a six on the third ball and won the game for his side by getting two runs on the fifth one. He remained unbeaten for 15 as the home side piled up 186 runs for the loss of five wickets.

Chennai Super Kings grasped the charged match with a margin of five wickets and has clinched the top spot in the IPL 2013 with 10 points.