The skipper of New Zealand, Brendon McCullum, got back to his form with a superb ton whereas Kane Williamson smashed a hundred as the hosts rule over India.

The Black Caps amassed 329 for the loss of four mere wickets after 90 overs at stumps on day one.

The first Test of the two match series commenced on Thursday, February 6, 2014, at Eden Park, Auckland.

Earlier, MS Dhoni, the captain of India, won the toss and invited the home side to bat first. The decision paid off immediately when the Kiwis lost three top order batsmen for just 30 runs. Kane Williamson along with Brendon McCullum joined together in the center under gloomy conditions and took the score to 54 at lunch interval. The first was dropped at 34 by Murali Vijay in the first slip whereas his partner opted to attack and was sending the ball out of fence regularly.

Williamson continued with his brilliant form and went past his fifty with a six in the 38th over. McCullum was dropped at 46 by Ishant Sharma at his own bowling and the batsman crossed his half century with a couple of fours. The duo got full use of the let offs and enhanced the score to 200 runs mark in the 56th over. Brendon McCullum hammered his eighth Test century in style with a six over long-off and Kane Williamson powered his fifth Test hundred in the process. The 221 runs partnership was dislodged at 251 when the latter was gone for 113 off 172 balls with 2 lofty sixes and 10 fours. Corey Anderson walked in next and played few elegant shots during his unbeaten innings of 42. McCullum cemented his end for 143 off 210 comprising 2 big sixes and 18 fours as the Black Caps piled up 4-329.

Zaheer Khan and Ishant Sharma were the only successful bowlers with two wickets each.

New Zealand batsmen have continued with their brilliant form and an addition of 150-200 runs to the total can create problems for India. 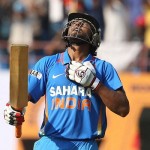