Graeme Swann, well assisted by Steven Finn and Stuart Broad destroyed the batting line up of New Zealand as the visitors face another defeat in the 2nd Test.

Earlier, the hosts started the day at 7-337 in 94 overs, Matt Prior and Graeme Swann were unbeaten for 38 and 21 runs respectively. Prior was caught by Ross Taylor at first slip off Tim Southee in the very first over for 39 as Trent Boult got two wickets in the 99th over. The last three wickets were lost with the addition of 17 runs to the total, Swann held his end for 26 as England piled up 354 in their first innings.

Trent Boult was the supreme wicket taker while grabbing five, Tim Southee got two whereas Neil Wagner, Dough Bracewell and Kane Williamson claimed one wicket each.

Peter Fulton and Hamish Rutherford got off slowly by scoring 19 runs in the initial 8 overs with 3 boundaries. Rutherford hit 2 fours in the next over and they speeded up the run rate as the ball visited the rope frequently. The partnership was broken at 55 when Peter Fulton was caught and bowled by Steven Finn for 28 off 48 balls with 5 fours. Kane Williamson joined in next with Rutherford who became the next victim of Finn at 62 at his personal feat of 27 from 45 with 4 fours.

That was the beginning of the disaster for the Black Caps as the rival bowlers came out with a deadly bowling. The wickets kept on falling like ninepins and Kane Williamson was the sixth batsman who went back to the pavilion at 82 in 29 overs for 13 runs off 50 deliveries. The Kiwi skipper Brendon McCullum and Tim Southee got together under trying conditions and the first hundred of the innings was posted on board in the 33rd over. The pair crept to 119 when Tim Southee was declared leg before wicket off Stuart Broad for 19 after the hosts asked for a review.

McCullum was the 9th batsman who went back to the dressing room for 20 and the Kiwis were reeling at 9-122 in 39.1 overs. Neil Wagner and Trent Boult did not surrender and played their shots at will. Boult hit the first six of the innings in the 41st over and Wagner punished Stuart Broad for 18 runs comprising 4 well timed fours. Boult followed by dispatching 16 runs in the next over with 2 lofty sixes and 1 four and the fifty runs partnership was attained on the first ball of the 44th over off just 24 balls. Neil Wagner was finally clean bowled by James Anderson for 27 off 15 deliveries with 6 fours. Trent Boult secured his end for 24 from 15 with 3 giant sixes and 1 four as the Black Caps managed 174 in 43.4 overs.

England gained a valuable first innings lead of 180 runs and preferred to bat instead of forcing the follow on to the visitors.  Alastair Cook and Nick Compton scored four runs off the even overs as the first hit 2 fours in the next over. Cook looked like being in an aggressive mood, he added another 5 boundaries in the following overs and went past his fifty. Compton was defensive at his end, he managed just seven runs on 38 balls and became the first victim at 72 without adding another run. Jonathan Trott got in next and hit his first four on the 24th ball and the first hundred of the innings appeared on the screen in the 35th over. Alastair Cook held his end for 88 off 132 with 13 fours and Jonathan Trott was at the other end at 11 as England thrashed 1-116 in 41 overs.

England has gained an overall lead of 296 runs with 9 wickets still in hand and two days to spare. The hosts are on the driving seat and New Zealand looks like losing another Test and they will have to bat excellently to save the game. 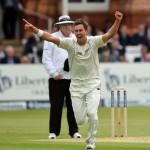 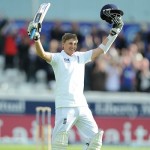