The courageous speedster of Australia, Brett Lee was determined to carry on participating in the One Day Internationals despite his broken toe and injurious right foot.

Brett Lee suffered a blow on the toe when MS Dhoni struck a powerful shot on the second ball of his last over of the Twenty20 game. The T20 was played at Melbourne Cricket Ground on February 3, 2012 which India won by eight wickets and the two match series ended 1-1.

The medical assistance was provided to the fast bowler after the match which revealed that he had broken his toe. The Australian team doctor, Trefor James suggested him rest for about six weeks which means he was out of the Commonwealth Bank Series.

It was a cause of concern for Brett Lee who wanted to participate in the tri series involving India and Sri Lanka. He made a surprised decision by announcing to play against Sri Lanka in the 6th match of the series and made himself available besides healing his foot.

The 35-year-old took part in the game against the Islanders on February 17, 2012, at Sydney Cricket Ground, took one wicket from seven overs as the encounter was clinched by the visitors by 8 wickets.

He has been in the tournament ever since  that match while representing the Kangaroos and was looking forward for an interesting last pool game against Sri Lanka on March 2, 2012, at Sydney Cricket Ground. Lee anticipated a tough game and commented,

“Hopefully, I’ve been doing my job and playing some decent cricket. We have got a great squad of players and some serious depth so we’ll wait and see what happens tomorrow night,”

The right arm bowler has played four matches in the ongoing tournament and has taken five wickets at averaging 36.00 runs per wicket with the best of 3 for 49 runs. He was at his best in the seventh match of the series against India where he snatched three wickets for 49 runs after delivering his full quota of 10 overs. The home side won the match convincingly by a huge margin of 110 runs as the Indian batsmen surrendered against the lethal bowling of Australia except MS Dhoni who scored 56 runs.

Lee has still not recovered fully from his swollen foot and the x-ray diagnosed that his toe was still broken. He is a brave cricketer and always prefers to do his best for the nation and that was the only reason he returned to the game while putting aside his injuries. The devoted Lee expressed his emotions as, 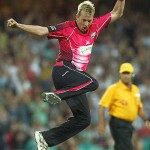 I am ready for the burst – Brett Lee 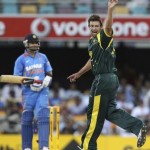 India back lashed by Hilfenhaus and Lee in tri-series