India A outplayed South Africa A in all departments of the game in the first unofficial Test and the home team surrendered to the visitors with a big margin.

India A powered 582 after losing nine wickets before their first innings was declared by the skipper, Cheteshwar Pujara. South Africa scored 357 while utilizing 111.2 overs in the first followed by 212 in the second innings.

Cheteshwar Pujara (India A) was declared ‘Player of the match’ for his brilliant batting and captaincy.

Earlier, the hosts commenced their first innings at 9-312 in 99 overs whereas Kyle Abbot was unbeaten at 9 runs and Andrew Birch joined him at the other end. The last pair did not panic, they kept on accumulating the runs with regular boundaries and took the score to 357. Andrew Birch was declared leg before wicket off Suresh Raina for 18, Abbot was at the other end at 33 off 64 balls with 3 fours as the entire home side was bowled out for 357.

Ishwar Pandey was the highest wicket taker with four, Suresh Raina got three whereas Jaydev Unadkat, Mohammed Shami and Shahbaz Nadeem held one wicket each.

South Africa A conceded a first innings lead of 225 runs and a follow on was forced on them by the Blue Shirts A. The home side had a disastrous second innings beginnings when they lost three top order batsmen for 15 mere runs. Reeza Hendricks was clean bowled by Ishwar Pandey for four whereas Dean Elgar and Jean-Paul Duminy were held lbw off Mohammed Shami for 3 and 0 runs respectively. Temba Bavuma joined in with RileeRossouw who dispatched 3 fours in the 10th over of Mohammed Shami. They kept on crawling and extended the score to 60 in 19.3 overs when the stumps of Rossouw were broken by Suresh Raina for 34 off 47 deliveries with 4 fours.

Justin Ontong came in next and the batsmen picked the run rate up by scoring 10 in the 21st over and 9 runs later. Ontong hit two fours in the 25th one but lost his wicket for 19. Thami Tsolekile associated with Bavuma and they enhanced the score to 123 before the first went back to the dressing room for 23. Temba Bavuma secured his end, he attained his 9th First-class fifty with a couple of fours in the 44th over and became the 8th victim for 65 off 138 with 6 fours. Simon Harmer remained unbeaten for 31 as the second innings of the hosts was squeezed for 212 after utilising 66.5 overs.

Ishwar Pandey and Mohammed Shami were the top wicket takers with three wickets each, Rohit Sharma succeeded by holding two whereas Suresh Raina and Shahbaz Nadeem chipped in with one wicket each.

India A triumphed in the first unofficial Test with a huge margin of one innings and 13 runs and leads the two match series 1-0. 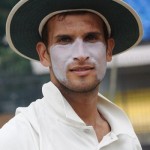 India A in sight of a victory – 1st unofficial Test vs. South Africa A