The highly rated Indian middle order batsman, V.V.S.Laxman was convinced that the national side has enough stint to beat Australia and once again will touch the peaks of Test ranking. 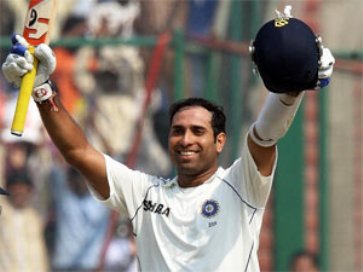 The Indian team is in high spirits after their recent performance in the three Test series against West Indies. They won the series 2-0 comprehensively after beating the Windies by five wickets on November 9, 2011 at Delhi. They followed on by clinching the second Test by an innings and 15 runs at Kolkata on November 17, 2011. The third and final Test ended in a draw on November 26, 2011, at Mumbai but the home side shown their supremacy under the skilled leadership of MS Dhoni.

Vangipurappu Venkata Sai Laxman made his Test debut against South Africa on November 20, 1996, at Ahmedabad. He scored 62 runs in the match which included fifty in the second innings as India won the match by 64 runs. He has become an important member of the squad by his professional batting and assisted his country in quite a few victories by his individual performance.

Australian bowling attack has been one of his favourites since he has scored lavishly against them. He has played 25 Tests, went in to bat for 46 times, scored 2279 runs at an excellent average of 55.58, the best of 281 runs with six hundreds and 11 fifties.

The current Indian squad is a blend of youth and experience with the emergence of two match winning spinners, Ravichandran Ashwin and Pragyan Ojha who dominated the series against the Caribbeans by grabbing 22 and 20 wickets respectively. Laxman believed the duo will carry on with their performance in Australia with the support of their seasoned batting. He said,

“Definitely, this tour to Australia is a big one as we are very keen to regain the No. 1 Test status. The confidence and morale are very high after the series win against West Indies, which followed the disappointment in England. So we hope to carry on the momentum to ‘Down Under.”

Laxman was sure that Sachin Tendulkar will achieve the distinction of his 100th Hundred soon and he will be delighted to be a part of the same squad once little master achieves that feat.

The right hand batsman was pleased with the decision by ‘The Board of Control for Cricket in India’ for sending few cricketers ahead of the tour to Australia which will assist them to get accustomed with the conditions ahead of the Test series.

Laxman warned the Indian players not to take the Kangaroos lightly as they are once again emerging in to a strong unit under the leadership of Michael Clarke. The team has to fight well in the field by utilizing all of their skills which can bring them positive results. He added,

“A series in Australia against any line-up is always tough for anyone. So there is no question of being complacent even as Australia is in the rebuilding process. At any level, we have to give off our best and we hope to do exactly that.”

The four Test series will commence on December 26, 2011, and the stage will be set at Melbourne Cricket Ground, for hosting first match.