The ace all rounder of Pakistan, Mohammad Hafeez, dispatched his 2nd ton in Three ODIs vs. Sri Lanka and held two wickets as the hosts grasped the game easily.

The Green Shirts blasted 326 runs for the loss of just five wickets in 50 overs and bowled out the Lankan Lions for 213 with 32 balls to spare.

Mohammad Hafeez (Pakistan) was declared ‘Player of the match’ for his superb all round performance in the game.

The third One Day International of the five match series was played on Sunday, December 22, 2013, at Sharjah Cricket Stadium.

Earlier, Angelo Mathews won the toss for the Islanders, put the hosts into bat first and the Green Shirts lost their first wicket for two runs. Mohammad Hafeez got together with Ahmed Shehzad and they found it difficult to score the runs freely in the first 10 overs. The pair started picking up the boundaries later as Mohammad Hafeez was dropped by Lasith Malinga at 26.

Ahmed Shehzad attained his fifth ODI fifty in the 20th over and his partner got his half century six overs later. The second wicket fell at 162 when Ahmed Shehzad was run out for 81 and the incoming batsman, Sohaib Maqsood, was gone for 21. The Pakistani captain, Misbah-ul-Haq walked in next while Mohammad Hafeez smashed his 8th ODI ton in the process. The first became the next victim for 40 and the latter remained unbeaten for 140 off 136 balls with three towering sixes and 11 fours. Umar Akmal was at the other end for 23 as Pakistan amassed 5-326 after 50 overs.

Thisara Perera was the top wicket taker with two whereas Nuwan Kulasekara and Lasith Malinga held one each.

The Islanders went down by two wickets at 17 and the third one fell at 44 when Dinesh Chandimal joined in with Tillakaratne Dilshan. The latter was scoring most of the runs, completed his 34th ODI fifty with a four and was dismissed at 59. Angelo Mathews associated with Chandimal who surrendered at 132 for 36. The rival bowlers kept on picking the wickets at regular intervals and Mathews was the only other batsman who got a reasonable score of 44. Seekkuge Prasanna scored 22 and the innings of the Lankan Lions was folded back for 213 in 44.4 overs.

Pakistan triumphed in the third ODI by a huge margin of 113 runs and leads the series at 2-1. 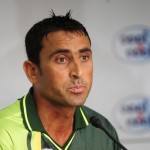 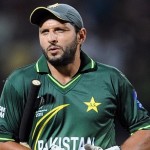