The prominent star of Australia, David Hussey proved his worth as a bowler after grabbing four wickets against Sri Lanka in the first final of the Commonwealth Bank Series which revamped him from net bowler to a match winner.

The first final of the three match series took place at Brisbane Cricket Ground on March 4, 2012. The Kangaroos smashed 321 runs in 50 overs and the Lankan Lions were at the receiving end after losing their star openers, Mahela Jayawardene and Tillakaratne Dilshan for 52 runs in seven overs.

David Hussey was introduced in the attack by Michael Clarke, he did not let him down and clinched the important wicket of their upcoming promising star batsman, Dinesh Chandimal for just 14 runs after he had added 41 runs for the third wicket. Lahiru Thirimanne became his next victim for 14 as well when the visitors were trying to consolidate. The hard hitting Farveez Maharoof became his third victim at his individual score of just eight runs.

Nuwan Kulasekara became a threat for the home side when he was punishing the Aussie bowlers on all corners of the park. The Islanders were cruising towards victory when Upul Tharanga was securing the other end while adding useful runs. The duo became threatening when Hussey was introduced in the attack again in the 42nd over and Kulasekara welcomed him by dispatching consecutive sixes on the first two balls.

The right arm off spinner took the revenge on the fourth ball of the over when Nuwan Kulasekara was caught smartly by Xavier Doherty at extra cover for 73 off just 43 deliveries with three lofty sixes and 7 sweetly timed fours. That was perhaps, the most important wicket of the match which changed the complexion of the game as the seventh wicket association had already produced 104 runs in just 11.3 overs. Australia won the cliff-hanger by just 15 runs when the Sri Lankans were bowled out on the second ball of the 50th over.

David Hussey flourished match winning performance by grasping 4 wickets for 43 runs in eight overs and added a relief to his captain for the future games.

Hussy is the highest scorer in the Commonwealth Bank Series 2011-12 so far by plundering 413 runs at a super average of 68.83 runs, the best of 74 with five fifties. He has taken four wickets after delivering just 15 overs averaging 18.25 runs per wickets with the best of 4 for 43 runs.

The Aussies will be visiting West Indies to participate in five One Day International, two Twenty20s and three Tests. Hussey has his tail up after assisting his team with his bowling especially at the time of crises and believed he will be vital in the forthcoming series as well. He said,

“I think all subcontinent countries and the West Indies definitely suit spin bowling. I wouldn’t say I’m a spinner – if I hit a few pebbles they might turn a little bit. I’m happy to bowl at any given time, and you want to take the wickets of their key batsmen, and that gives you more credence with the captain to bowl you at critical times.”

David Hussey has been labelled as a limited over cricketer and has taken 18 wickets in 48 ODIs at an average of 29.77 with the best of 4 for 21 runs. He was instrumental in the shortest version of the game and has collected 19 wickets at an excellent average of 19.10 in 34 games.

Hussey was pleased with his transformation from a net bowler to a front line bowler while commenting,

“It’s funny, a couple of years ago I was classified as just a batsman and a muck around net bowler who bowled to the tail-enders in the nets. Now I’m opening the bowling in T20 cricket and bowling key overs in one-day cricket. So I definitely take it a little more seriously now. 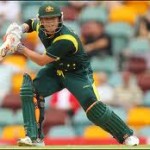