The spin duo of West Indies A, Nikita Miller and Veerasammy Permaul, led their team to a smooth victory against the hosts India A in the 1st unofficial Test.

West Indies A hammered 429 in their first innings and declared their second at 130 after losing three wickets in 34.5 overs. India A was bowled out for 245 in the first innings followed by 152 in the second.

Earlier, the captain of the visitors, Kirk Edwards, declared their second innings at their overnight score of 3-130 off 34.5 overs. They set a target of 315 runs for the hosts to win the game with one whole day to spare. India A lost their first wicket at 18 as their skipper, Cheteshwar Pujara, joined in with Jiwanjot Singh and tried to stabilise the innings. They found it hard to push the scoring rate against the calculated bowling attack of the rival team. The duo crept to 46 in 25.2 overs when Jiwanjot Singh was caught by Edwards off Veerasammy Permaul for 24 from 78 balls with 3 fours. Manpreet Juneja walked in next as Pujara was fighting at the other end but was unable to steal the boundaries at will. The latter was declared leg before wicket off Nikita Miller at 62 at his individual score of 17 and was replaced by Rohit Motwani.

The middle and lower order batting of India A crumbled against the quality spin bowling of the visitors and especially Nikita Miller was unplayable. The entire batting revolved around Juneaj who was fighting superbly at his end whereas the wickets kept on sliding at the other side. Parvez Rasool was the only batsman who provided a partnership of 25 runs for the seventh wicket as Juneja completed his fifth First-class fifty in the process.

The deadly spin pair of Miller and Permaul ripped through the strong batting line up of the hosts and Manpreet Juneja was the last batsman who was dismissed for 70 off 193 deliveries with 1 six and 4 fours. The entire India A team was bowled out for 152 runs in 85.4 overs after exhibiting a dismal batting performance in both innings.

West Indies A won the first unofficial Test with a heavy margin of 162 runs and leads the three match series 1-0. The second game will commence from October 2, 2013, at Jawaharlal Nehru National College of Engineering Ground, Shimoga. 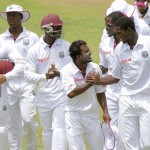 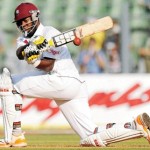