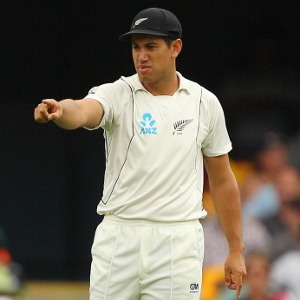 The New Zealand Captain, Ross Taylor, was dejected on the dispiriting performance of his batsmen in the first Test against Austarlia at Brisbane where they were at the receiving end. Australia humiliated them in the match by winning comfortably with a wide margin of nine wickets.

The Black Caps batsmen demonstrated well in the tour-match against Australia A which was played from on 24,25,26,27 November, 2011, at Allan Border Field, Brisbane. Brendon McCullum smashed 146 runs in the first innings followed by Herculean 175 by Jesse Ryder and devastating 138 runs by the Captain himself.

Both of them were negotiated well by the New Zealanders and all of their major batsmen had a chance to open their arms in that game. Taylor was surprised with the way they surrendered against both of them in the first Test and commented,

“We had a good preparation leading up to the match and we all felt confident. We faced Starc and Pattinson in the warm-up game. It was one of those days where we didn’t execute as well as we would have liked. Turning up this morning we still felt we were in this match.”

Ross Taylor gave away full credit to the youngster Pattinson who bowled on perfect line and length and the Kiwi’s were unable to read him. He sunk their boat in the second innings by clinching five wickets in just 11 overs while conceding 27 runs. He was ably supported by off spinner Nathan Lyon who got three wickets as well.

James Pattinson was in sight of a hat-trick when he got rid of Kane Williamson and Taylor on the successive deliveries in the second innings which was averted by Jesse Ryder. Taylor gave full marks to the 21-year-old pacer and honoured him by saying,

“You’ve got to give credit to James Pattinson, he put the ball in the right areas enough times for us to nick it. But we’ve still got to be harder on ourselves as a batting unit. Not only this morning but on the first day there were some soft dismissals and Australia didn’t have to work that hard for their wickets.”

Ross Taylor also blamed the team for poor ground fielding where they had quite a few let ups as well. Michael Clarke was dropped by Doug Bracewell at 85 and 105 runs while Starc also got a life. The result could have been different had the catches been held at the crucial stage of the game.

New Zealand is anticipating a better show in the second Test and they believe their team will come up with strong performance in the next game. The second Test will be played at Bellerive Oval, Hobart, from December 9, 2011. Taylor believes a sterling performance in the final encounter especially by their batsmen will bring them confidence in the upcoming home series. The Black Caps will play one Test against Zimbabwe followed by a three Test Series against South Africa.