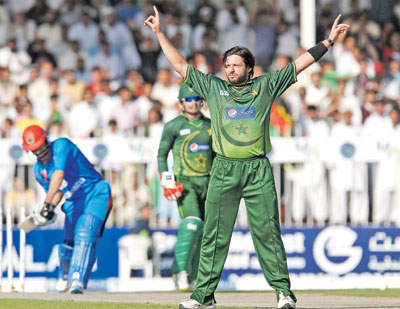 Shahid Afridi spins Aghanistan as Pakistan wins the only ODI

Shahid Afridi’s lethal spin bowling restricted the Minnows Afghanistan for a nominal target which Pakistan achieved for the loss of just three wickets in the only One Day International at Sharjah.

Afghanistan scored 195 runs before they were bowled out in 48.3 overs and the Green Shirts went past the total after scoring 198 runs with seven wickets in hand.

Afridi was declared ‘Player of the match’ for his bowling figures of five wickets for 36 runs in 10 overs.

The match was held at Sharjah Cricket Stadium (neutral venue) on February 10, 2012.

The Afghani Captain, Nawroz Mangal won with the coin and preferred to bat instead of putting his batsmen under pressure while chasing a target. Their first wicket fell at 23 runs when the opener Noor Ali Zardan was caught and bowled by Umar Gul for nine runs. Mohammad Shahzad came in next and joined with Karim Sadiq. They added 31 runs when Afridi struck as Karim was caught behind by Umar Akmal for 40 runs off 47 balls with two sixes and even fours.

Afridi continued surprising the Afghanis, ran through the middle order and grabbed three important wickets. Mohammad Nabi and Samiullah Shenwari tried to consolidate the innings and shared 46 runs partnership for the sixth wicket when the earlier was unluckily run out for 37 runs.

Samiullah obstructed the attack by scoring 32 runs as the tail vanished and the whole team was sent back to the pavilion for 195 runs with nine balls to spare.

Afridi was the star of the evening with five wickets as the pacers Umar Gul and Wahab Riaz shared two wickets each.
The Green Shirts replied with canniness and posted just seven runs in the first three overs. Mohammad Hafeez lost his wicket on the last ball of the fourth over as the ball hit the stumps off an inside edge for eight runs. Asad Shafiq was promoted in the batting and joined with Imran Farhat who was shaky in the initial overs.

Asad attacked the rival bowling as soon as he arrived at the crease and sent the ball to the boundary more often. He played a hurried knock of 20 runs off 21 balls with 5 fours and the second wicket fell at 42 runs. The most experienced and in form batsman, Younis Khan appeared in the center and initiated his innings with caution while Imran continued accumulating the runs at the other end.

Imran got a life when he was dropped on 33 by Mangal at mid-on at the bowling of Mirwais Ashraf on the third ball of the 19th over. He availed the opportunity by dispatching three fours in the next over and completed his fifty. The left hand opener gave an easy return catch to the bowler Samiullah for 52 off 67 balls with 9 fours as the total touched 99.
The ever reliable Captain Misbah-Ul-Haq appeared on the scene as Younis Khan started his assault on the bowlers. He brought up his fifty on the fifth ball of the 33rd over by dispatching it to a four and Misbah was solid as rock at the other end.

The duo was severe at the Afghan bowlers and the victory was achieved on the first ball of the 38th over which was directed to the boundary by Misbah. Pakistan thrashed 198 runs with seven wickets in hand, Younis and Misbah were at the crease with 70 and 40 runs respectively.

Dawlat Zadran was the chief wicket taker with two and Samiullah chipped in with one wicket.

It was a historical day for Afghanistan cricket as they played the first ODI against a regular ICC member which was lost by three wickets but displayed fighting qualities and their bright future was eminent.