The middle and late order batting of South Africa resisted well after their top order surrendered against the quality bowling of England in the decisive Test.

The Proteas recovered after an early blow and managed 262 useful runs in 87.4 overs with three wickets in hand at the close of the first day’s play.

The third and final Test of the series commenced on August 16, 2012, at the famous Lord’s, London.

Earlier, the captain of South Africa, Graeme Smith, won the toss, elected to bat and opened the innings with Alviro Petersen in a cautious manner. They scored five runs in the first three overs and the first four of the innings was posted by Petersen in the fourth over. The score was taken to 22 when Smith was declared caught behind for 14 off James Anderson after a review was taken by the hosts.

The prominent batsman, Hashim Amla, joined in next with Petersen and found it hard to score the runs. The latter opened up in the 15th over with a couple of fours but was caught behind by the wicketkeeper Matt Prior off Steven Finn for 22 on the third ball of the 19th over. Finn struck again two balls later when he uprooted the stumps of Hashim Amla for 13 runs. Jacques Kallis added to the miseries of the visitors after he became the next victim of Finn for three mere runs.

South Africa was reeling at 4-54 in 20.3 overs when AB de Villiers and Jacques Rudolph got together at the crease and tried to establish the innings. The duo crawled to 79 after 30 overs as de Villiers opted to attack, got two fours in the next over and found the same result two overs later. The first hundred of the innings appeared on board in the 36th over and de Villiers lost his wicket after the addition of five runs at his individual score of 27.

Jean-Paul-Duminy appeared on the scene next as Rudolph was securing his end confidently. Both batsmen took their time to settle down, started playing their natural game and sent the ball out of the rope at regular intervals. The fifth wicket contributed 58 runs and enhanced the score to 163 when Jacques Rudolph played on a ball to his stumps and was gone for 42 runs.

Vernon Philander was the next batsman who came in next, opened his shoulders with two fours in the 59th over and got another  one in the following over. Duminy carried on with his responsible knock from the other end and the second hundred of the innings emerged in the 70th over. Philander believed in the attack and dispatched two fours to Stuart Broad in the 72nd over and Duminy also achieved his fourth Test fifty in the same over.

The proceedings were going smooth for the Proteas when Jean-Paul-Duminy was caught behind by Prior off Anderson for 61. Dale Steyn played a brisk knock of unbeaten 21 with three fours and Vernon Philander was four runs short of his maiden Test fifty when the play was called off for the day as South Africa reached 262 for the loss of seven wickets.

James Anderson and Steven Finn were the highest wicket takers with three wickets each as Graeme Swann claimed one.

South Africa will anticipate another 50-60 runs to make a game out of it whereas England will try to wipe off the tail as quickly as possible to get hold of the match. 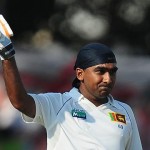