The courageous fast bowler of Pakistan, Umar Gul wrapped three important wickets and established the victory by eight runs against England in the first Twenty20.

Pakistan scored 144 runs in the allocated 20 overs after losing six wickets, which looked nominal but they defended well as England could reach 136 runs for the loss of six wickets.

Umar Gul was declared ‘Player of the match’ after his crunch performance which was badly required by his side.
The match was played at Dubai International Cricket Stadium, and February 23, 2012.

Earlier, the England Captain, Stuart Broad, won the toss and put Pakistan in to bat keeping in view the poor show of their batsmen in the recently concluded One Day Internationals which the visitors whitewashed 4-0.

The Green Shirts initiated the innings with Mohammad Hafeez and the debutant Awais Zia who has been titled as ‘Mini Boom Boom’ in the domestic circuit. Awais shown few glimpses of his talent by dispatching a four and six but was gone for 18 off 12 deliveries on the fifth ball of the third over,

The openers provided a reasonable start of 32 in 2.5 overs as the new comer, Asad Shafiq maintained the tempo and got a life when he was dropped by Graeme Swann off Jade Dernbach for nine runs. They contributed 33 runs for the second wicket as Asad lost his wicket for 19 runs.

The English bowlers paralyzed their batting as five of their top order batsmen were sent back to the pavilion for 73 in 10.4 overs which included top guns like Shahid Afridi and Umar Akmal.

The Skipper Misbah-Ul-Haq and Shoaib Malik put breaks on the sliding wickets and kept the score board moving with odd boundaries and both of them hit a six each. They took the score to 144 runs as Shoaib was caught smartly by Jonny Bairstow off Dernbach on the last ball of the innings. He was gone for 39 off 33 balls with one six and 4 fours as Misbah remained unbeaten for 26 runs.

Swann was the highest wicket taker with three, Steven Finn and Dernbach collected one wicket each.

England made a thunderous start as Kevin Pietersen snatched 13 runs in the very first over with two fours. He carried on with the onslaught as Craig Kieswetter secured the other end while adding useful runs to his credit. They accumulated 40 runs in the first five overs and Pakistan got a sigh of relief when pietersen was caught excellently on the rope by Asad Shafiq on the bowling of Afridi for 33 off 21 with one six and 4 fours.

The first wicket associations plundered 48 runs in 5.4 overs as Hafeez clean bowled Kieswetter after the addition of just three runs in the total at his individual contribution of 14. Hafeez struck again in the 13th over when he uprooted the stumps of Eoin Mrgan for 14 and England looked like in trouble at 80 for three in 12.2 overs.

Ravi Bopara took command of the situation by powerful hitting quite often and was ably supported by Bairstow at the other end. The duo took the score to 113 in 15.5 overs as Umar Gul brought the Green Shirts back in to the game when Bopara was bowled around his legs for 39. Gul turned the tables in his next over when he clinched two wickets of Jos Buttler and Samit Patel on the consecutive deliveries.

England required 18 runs to win the match from the last over of Junaid Khan but they fell short of eight runs.
Umar Gul delivered a match winning spell and secured three wickets, Hafeez struck twice as Afridi claimed one wicket.
Pakistan won the thrilling encounter by a narrow margin of eight runs and would like to continue with the same spirit in the next two games. 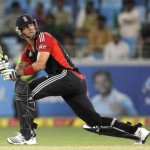 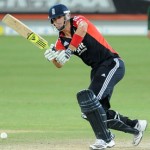