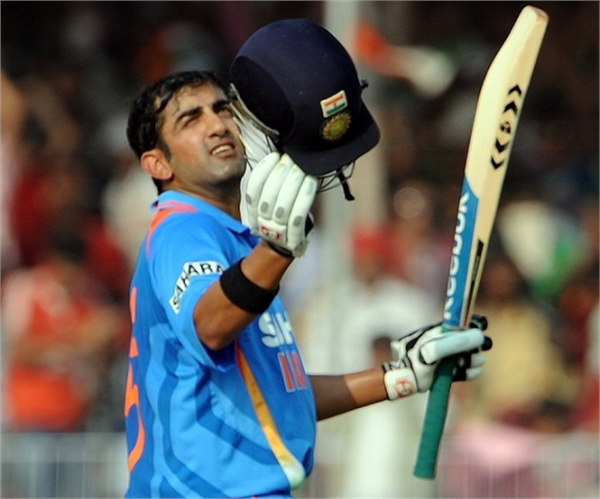 Gautam Gambhir provided a solid base by trouncing a ton and a breezy partnership of Suresh Raina and Irfan Pathan led India to a cracking victory vs. Sri Lanka.

Sri Lanka scored 286 with five wickets in hand at the end of the metered 50 overs and India achieved the target on the fourth ball of the last over by hammering 288 runs for the loss of five wickets.

Gautam Gambhir – Player of the match for his superb ton

Gautam Gambhir (India) was declared ‘Player of the match’ for his absorbing century while opening the innings.

The third One Day International of the five match series was played on Saturday, July 28, 2012, at R Premadasa Stadium, Colombo.

Earlier, Mehela Jayawardene, the captain of Sri Lanka, won the toss and opted to bat first. The decision proved fatal as they lost three quick wickets for just 20 runs in 5.3 overs as Zaheer Khan and Ashok Dinda struck early in the innings with their lethal bowling. Upul Tharanga and Tillakaratne Dilshan were dismissed by Zaheer Khan for 8 and 4 runs whereas Dinesh Chandimal was declared leg before wicket off Irfan Pathan for a duck.

Kumar Sangakkara and Jayawardene faced the Indian attack bravely and tried to consolidate the innings. They got 13 runs in the 10th over with a couple of fours and set the tone for a reasonable scoring rate. The score board was kept ticking with occasional boundaries and the first hundred of the innings was attained in the 22nd over. Jayawardene reached his 68th ODI fifty on the fourth ball of the 25th over and the fourth wicket partnership counted for 121 runs when he was gone for 65 runs.

The all-rounder, Angelo Mathews, joined in next with Sangakkara who achieved his 73rd ODI half century in the 30th over. Kumar Sangakkara tried to open up after his fifty but was caught by Virat Kohli off Dinda for 73 off 95 balls with 5 fours. The fifth wicket was lost at 182 in 38 overs as Jeevan Mendis appeared in the centre and associated with Mathews.They started picking the runs from the 41st over and gathered 10 runs followed by 9 in the next.

Mendis hit the first six of the innings in the 45th over and Mathews continued enhancing the runs while sending the ball out of the fence regularly and got his fifty in the 47th over. The duo added 16 runs in the last over with one six and one four as the Islanders smashed 286 runs for the loss of five wickets. The last 10 overs produced 97 runs, Angelo Mathews remained unbeaten for 71 off just 57 balls with 1 six and 5 fours whereas Jeevan Mendis was at the other end at 45 from 40 deliveries with 1 six and 3 fours.

Zaheer Khan was the top wicket taker with two as Irfan Pathan, Ashok Dinda and Rahul Sharma shared one wicket each.

India lost the important wicket of  Virender Sehwag at 8 runs when he was gone for just three runs and Virat Kohli replaced him at the crease. The other opener, Gautam Gambhir, decided to attack and dispatched two consecutive fours in the third over. Kohli was playing at his aggressive style and both kept the score board running while Gambhir posted his fifty in the 17th over.

The first hundred of the innings was scored in the next over and the Men in Blue lost their second wicket at 113 runs when Kohli was caught and bowled by Rangana Herath for 38 runs.

The Indian skipper, MS Dhoni, promoted himself up in the order and came into bat after the fall of the third wicket as Gambhir was doing well at the other end. They shared a 67 runs partnership as Dhoni was clean bowled by Lasith Malinga for 31 off 49 balls with just one four. The third wicket was taken by the Lankan Lions at 180 in 35.1 overs and Gautam Gambhir thrashed his 11th ODI ton in the the 37th over.

The Blue Shirts lost two quick wickets with the addition of just 16 runs as Gambhir was unluckily run out for 102 scored off 101 deliveries with the assistance of 10 fours. The visitors required 78 runs off the last 10 overs when Suresh Raina and Irfan Pathan took the challenge bravely. Raina was the most aggressive of the two and gathered 11 runs in the 44th over with two rolling boundaries.

Irfan Pathan secured his end while getting occasional boundaries and Suresh Raina powered his 23rd ODI fifty with a six on the first ball of the 47th over from Malinga. The first batted according to the situation and returned the strike to the latter quite often. India required 21 runs from the last 18 balls to win the match that was reduced to 6 in 6 balls.

Angelo Mathews bowled the last over, Irfan Pathan hit the winning four on the fourth ball and achieved the victory for the team. Suresh Raina was unbeaten for 65 off 45 balls with 1 six and 6 sixes, Irfan Pathan supported him well without losing his wicket by scoring 34 from 31 deliveries comprising 3 fours. India amassed 288 runs with five wickets in hand and two balls to spare.

Lasith Malinga was the main wicket taker with two whereas Thisara Perera and Rangana Herath claimed one wicket each.

India won an exciting game with a margin of five wickets and leads the five match series 2-1 as the fourth ODI will be played at the same venue on July 31, 2012.