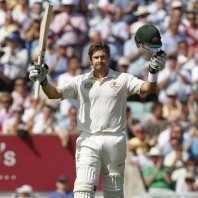 Shane Watson got back in the news by plundering a ton after 25 Tests, 45 innings and boosted his side with a couple of valuable partnerships vs. England.

Australia thrashed 307 runs for the loss of four wickets after 90 overs in their first innings.

Earlier, Michael Clarke, the captain of the Kangaroos, won the toss and went into bat first. The visitors faced an early shock when David Warner was caught behind by Matt Prior off James Anderson at 11 after scoring six runs. Shane Watson got together with Chris Rogers and the batsmen took their time to settle down. Watson preferred to attack and hit 4 fours on the first 28 balls he faced whereas his partner got nine runs off 39 deliveries. The first welcomed the debutant right arm medium fast bowler, Chris Woakes, with 3 fours in the 17th over and added another two boundaries four overs later. 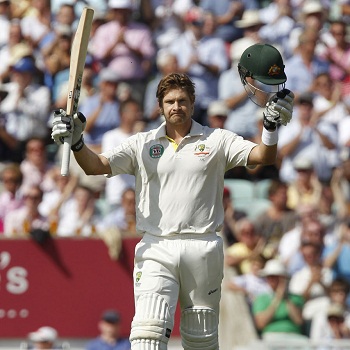 Shane Watson hit the first six of the match in the next one and went past his fifty in the 23rd over with a couple of fours. He accumulated 18 runs in the 25th one with the assistance of 4 fours whereas Chris Rogers remained silent at his end and scored 21 runs on 93 balls. The second wicket partnership was broken at 118 when Rogers was caught by Jonathan Trott at first slip off Graeme Swann for 23 off 100 with 3 fours. The next batsman, Michael Clarke, kept on struggling but was clean bowled by Anderson for just seven runs.

Steven Smith joined in next with Shane Watson who smashed his third Test hundred on the second ball of the 45th over. The century came after 25 Tests and that took him nearly three years as the last one was scored against India on October 1, 2010, at Mohali. Watson got a lucky break at 104 when he was dropped by the English skipper, Alastair Cook, in the slip off Anderson. Smith earned his first boundary by hitting as six whereas Watson kept on securing his end with determination and the score was enhanced to 3-183 in 58 overs when the Tea break was called by the field umpires.

The score went past the two hundred runs mark in the 64th over and Shane Watson crossed his previous best score of 126 as well. The duo kept on cruising with the assistance of regular boundaries and played all rival bowers at merit. Watson reached his 150 in the 69th over with 2 fours and Steven Smith achieved his sixth Test fifty in the 81st one. Watson was given leg before wicket at 160 off Woakes by the field umpire Kumar Dharmasena but was held not out by the third umpire on a review. The pair found it easy to score runs without any difficulty and were sending the ball out of the rope consistently.

The fourth wicket associated for 145 runs and took the score to 289 in 87.1 overs when Shane Watson was gone for 176 off 247 comprising 1 six and 25 fours. Peter Siddle appeared in the park next as a night watchman and saw off the remaining 2.5 overs along with his senior partner. Steven Smith was unbeaten for 66 off 133 balls with 1 six and 9 fours, Siddle was at the other end at 18 as the Aussies piled up 307 with six wickets remaining.

James Anderson was the most impressive bowler with two wickets whereas Stuart Broad and Graeme Swann collected one each.

Australia is in a commanding position and an addition of another 125-150 runs to the total can put them in front against England.