Australia is in commanding position as the skipper Michael Clarke led from the front by scoring 139 runs and the home side gained a decisive lead of 132 runs in the first innings against New Zealand. The Black Caps are facing a tough task ahead of them since they have lost one wicket for 10 runs at stumps on the third day. 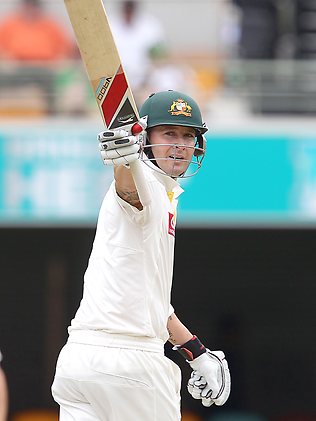 Both teams are facing each other at Brisbane Cricket Ground, Woolloongabba, Brisbane.

Earlier Australia started the third day at 154 runs for the loss of three wickets in 46 overs, Ricky Ponting and Michael Clarke were unbeaten on 67 and 28 respectively. The first session of play was extended for two hours and 30 minutes due to the time lost on the second day on a sunny and bright morning in Brisbane.

Clarke showed his intentions by hitting the first four of the day in the second over as Ponting consolidated at the other end. The old war horse was trapped leg before wicket on the fourth ball of the 53rd over off Chris Martin and has to go back even after the review. Ponting scored 78 runs off 140 balls which comprised 12 fours and the third wicket was lost at 177 runs after useful contribution of 86 runs.

Michael Hussey was the next batsman in his role was to play as a second fiddle to smooth going Clarke who completed his fifty while hitting a tremendous six off the second ball of 57th over by Daniel Vettori. Clarke was severe on the bowlers and kept on utilizing all scoring opportunities by sending the ball quite often out of the fence. He got a life after being dropped by the wicket keeper Reece Young off Doug Bracewell at 85 runs on the last ball of the 70th over. Hussey was gone in the very next over caught at short leg by Jesse Ryder off Vettori on 15 runs and continued with the poor form.
The fifth wicket was lost at 237 runs when the wicket keeper batsman Brad Haddin came to the crease and joined the Captain.

The dangerous looking Clarke completed his 17th Test ton by dispatching the fifth ball of the 80th over to four which was cheered up by Saturday crowd at Brisbane. Clarke was lucky again after he was dropped again in the third slip by Ryder off Bracewell again on 105 runs. Haddin opened his arms and collected 12 runs in the 88th over off Tim Southee which included two reeling shots to the boundary and continued the aggressive batting.

The skipper was finally gone after thrashing 139 runs, caught by Southee behind deep square on the bowling of Martin. His brilliant innings included 19 sweetly timed fours and one six and he contributed 108 valuable runs for the sixth wicket.
Haddin took charge of the situation and punished the rival bowlers at will but lost his wicket after scoring 80 runs off 145 balls with the help of two towering sixes and 6 fours.

Australia was finally bowled out at 427 runs in 129.2 overs and they gained a vital first innings lead of 132 runs.
Martin was the highest wicket taker for New Zealand by taking three, Vettori and Southee held two scalps each as Bracewell and Matin Guptill shared one wicket each.

The Kiwi’s had a bad start and lost the important wicket of Brendon McCullum at 10 runs when he had scored just one run. The play came to an end at the same score, Guptill was unbeaten on seven runs as Bracewell has yet to open his account.
New Zealand has an uphill task on the fourth day and their batting power house has to play well to get back in to the match.