Gautam Gambhir and Eoin Morgan laid a solid foundation for the win vs. Sunrisers Hyderabad with the assistance of an all round performance from Jacques Kallis.

Kolkata Knight Riders smashed 180 runs for the loss of four wickets in the allotted 20 overs and Sunrisers Hyderabad managed 132 with three wickets intact.

Gautam Gambhir (Kolkata Knight Riders) was declared ‘Player of the match’ for his 53 runs and able captaincy.

The 17th match of the India Premier League was played on Sunday, April 14, 2013, at Eden Gardens, Kolkata.

Earlier, Gautam Gambhir, the skipper of Kolkata Knight Riders won the toss, came in to bat with Manvinder Bisla and they started off well by hitting 3 fours in the third over. Bisla was doing well and added another 3 fours in the next couple of overs and Gambhir got two more in the seventh. Bisla became the first victim at 59 in 7.4 overs after scoring 28 as Jacques Kallis got together with Gambhir who was in an attacking mood and reached his fifty in the 12th over with a four. The hundred of the innings was displayed on board in the 13th over as Gautam Gambhir was clean bowled by Ashish Reddy for 53 off 45 balls with 1 six and 6 fours.

Eoin Morgan joined in next with Kallis and the first hit 1 six and 1 four in the 16th over as the latter got two back to back fours in the next one. Morgan humiliated Thisara Perera in the 18th over by dispatching 20 runs comprising 1 six and 3 fours and the fourth wicket produced 67 quick fired runs from just 30 balls. Eoin Morgan was run out for 47 off 21 mere deliveries with 3 lofty sixes and 5 fours and Jacques Kallis departed in an identical way on the last ball of the innings for 41 off 27 with 6 fours.  Kolkata Knight Riders piled up 180 runs with six wickets in hand at the close of the 20th over.

Karan Sharma and Ashish Reddy were the only successful bowlers with one wicket each whereas the rest of the five bowlers remained wicketless.

Sunrisers Hyderabad changed their batting order as Cameron White was sent in to begin the innings with Parthiv Patel.  They scored 24 runs from the first three overs with 1 six and 1 four from the latter and one four from White. The run rate was checked by the rival bowlers and the batsmen were unable to score any boundary in the following three overs. White hit the first six of his innings and the partnership was broken at 57 in 9 overs when Parthiv Patel was clean bowled by Jacques Kallis for 27.

White was gone 11 runs later for 34 off 43 balls with 1 six and 3 fours whereas their captain, Kumar Sangakkara, went out cheaply for just two runs. Ravi Teja and Thisara Perera put their heads down for the consolidation and the latter added 13 runs in the 14th over with 1 six and 1 four. The score was enhanced to 107 in 15.3 overs as Ravi Teja was caught by Manoj Tiwary off Sunil Narine for 10. The middle and lower order batting remained unconvincing against the deadly rival bowling and Thisara Perera surrendered after scoring 36 off 25 with 1 six and 2 fours. Sunrisers Hyderabad reached 132 after losing seven wickets at the closure of the 20th over.

Jacques Kallis was the star performer with three wickets, Rajat Bhatia held two whereas Sunil Narine and Sachithra Senanayake shared one wicket each.

Kolkata Knight Riders succeeded in winning the encounter comfortably by a good margin of 48 runs and added two points to their table. 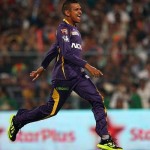 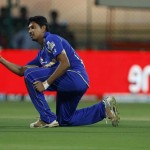 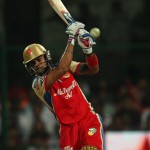