Rangana Herath mesmerized the visiting New Zealand in the opening Test by grabbing 11 wickets as Sri Lanka won the one sided game with plenty of time left.

New Zealand was bowled out for 221 runs in their first innings followed by a miserable performance in the second as they managed just 118. The first innings of Sri Lanka concluded on 247 runs and they gained a lead of 26 runs. The home side required 93 runs to win the match which was achieved in 18.3 overs in just 75 minutes without losing any wicket.

Rangana Herath (Sri Lanka) was declared ‘Player of the match’ for his outstanding performance as he grasped 11 wickets in the game.

The first Test of the two match series came to an end on the third day, which was Monday, November 19, 2012, at Galle International Stadium.

Earlier, the Black Caps started the day at 1-35 after 10 overs, Martin Guptill and Kane Williamson were at the crease with 13 and 9 runs accordingly. The visitors initiated with caution as the first couple of overs were maiden.  They got the first setback of the day on the 2nd ball of the next over when Guptill was clean bowled by Nuwan Kulasekara at his overnight score.

The captain of the Kiwis came in next and hit a couple of fours in the following two overs but Kulasekara removed Williamson at 10 in the 17th over. Daniel Flynn walked in next and tried to consolidate the innings with Taylor and the first fifty of the innings was attained in the 20th over. The batsmen were subdued due to the fall of two quick wickets and they found it hard to score the runs freely especially against the left arm spinner, Rangana Herath. Taylor was declared leg before wicket off Herath for 18 runs and James Franklin was stumped smartly by the wicketkeeper Prasanna Jayawardene on the third ball of the 30th over for just two runs.

Daniel Flynn looked settled but he became the sixth victim for a hard fought innings of 20 off 60 balls with one four and the visitors were in deep trouble at 6-79 in 33.2 overs. The tourists were unable to read the deadly spin bowling of Herath, well assisted by Suraj Randiv from the other end. None of the batsmen was able to touch the 30 runs mark and the entire innings was rolled back for 118 mere runs in 44.1 overs.

The Lankan Lions needed just 93 runs to win the match with plenty of time left in the match. Their innings was initiated by Tharanga Paranavitana along with Dimuth Karunaratne and they stuck to their task firmly. Karunaratne was the most aggressive of the two, sent the ball out of the fence regularly and added two fours in the 9th over. Pranavitana accumulated 10 runs in the next over with 1 six and 1 four and the first fifty on their innings was touched in the 10th over.

Karunaratne smashed his maiden Test fifty on his debut on the fifth ball of the 18th over, hit two fours in the next over and the target was met easily. Dimuth Karunaratne remained unbeaten for 60 off even deliveries with 9 fours whereas Tharanga Paranavitana held his end with 31 from 51 comprising 1 six and 3 fours.

Sri Lanka won the first Test convincingly with a huge margin of 10 wickets and leads the two Test series 1-0. 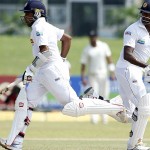 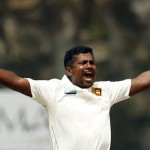 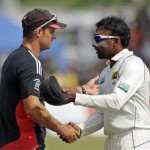