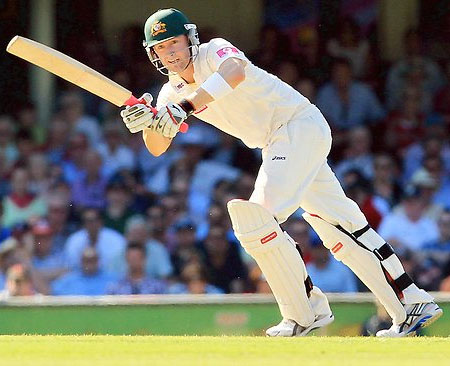 The Australian Captain thrashed unbeaten 251 runs while the seasoned Ponting assisted him well at the other end by smashing 134 runs and taught India how to bat at Sydney. The duo butchered the rival bowling at their will and piled up victorious runs on board.

The Kangaroos have accomplished 482 runs for the loss of just four wickets at stumps on the second day and have an authoritative 291 lead in the first innings. The Indians were bowled out at 191 runs in 59.3 overs, Captain MS Dhoni was the only batsman who went past 50 runs.

The Indians looked at the mercy of Aussies at the close of the second day’s play at Sydney Cricket Ground on January 3, 2012.

The home side started the second day at 116 runs for the loss of three wickets, Ponting and Clarke were unbeaten on 44 and 47 runs respectively. The Indians had to take couple of early wickets in the morning for their existence in the game and the Australians required gusty innings from the duo.

Clarke completed his fifty in the first over and Ponting followed him in style by dispatching four in the 30th over as Zaheer Khan and Ishant Sahrma started the proceedings from India. Both batsmen were crafting their innings without taking any risk but never denied any scoring chances. Umesh Yadav was introduced in the 35th over, he was economical in the beginning and delivered couple of maiden overs but Clarke dealt severely in the 42nd over and accumulated 12 runs.

There has been lot of criticism on Ponting lately and quite a few ex-cricketers and experts advised him to call it a day from cricket. He remained determined and came back strongly in the ongoing series by scoring 62 and 60 runs in the first Test at Melbourne Cricket Ground. The century at Sydney was achieved after a lapse of nearly two years as the last one was scored at Hobart against Pakistan on January 14, 2010, when he smashed 209 runs.

The flow of runs was witnessed after both batsmen completed their tons and the rival bowlers were at their mercy. India secured the first and only wicket of the day when Ponting was caught at point by Sachin Tendulkar off Sharma on 134 runs.

The fourth wicket partnership contributed mountainous 288 runs which brought a big dent for the visitors. Michael Hussey walked in next to replace Ponting as Calrke continued with the onslaught at the other end. The Captain had a lucky escape when he was dropped at 182 runs on the second ball of the 92nd over by Sharma of his own bowling.
Clarke availed the chance fully, did not look back from thereon and dispatched boundaries almost in every over. He punched his double century on the fourth ball of the 97th ball and more importantly at his home ground. Hussy was doing well at the other end by dispatching two consecutive fours and a six in the 107th over to Ashwin while completing his fifty in the next over.

Australia was at the driving seat by the close of the second day’s play by scoring 482 runs after losing four wickets and secured first innings lead of 291. Clarke was unbeaten on 251 runs while Hussey was moving ahead with 55. India was in sight of losing another match keeping in view the present batting performance and only a miracle can save them at Sydney.