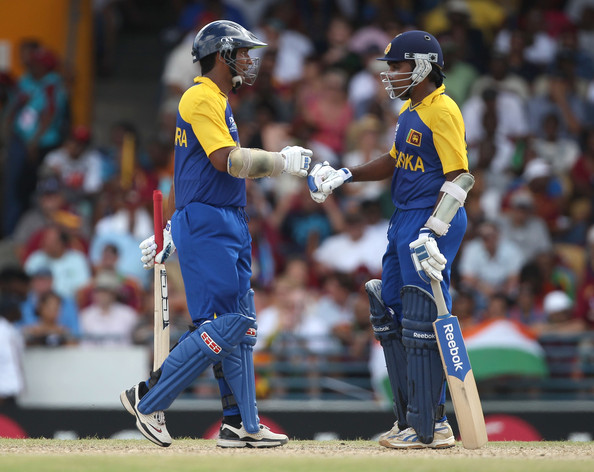 Test match cricket is all about occupying the crease for as much time as possible but also scoring runs at a consistent rate. This will be like putting some toothpaste which is there in your hand back into the tube, if there is only one batsman doing this. He needs a partner to be with him holding the other end or scoring alongside him so that the team benefits the most, and stands a greater chance to win Test matches.

Here is a tribute to all those partnerships which have lit up the longest format of the game and defined quality batsmanship. 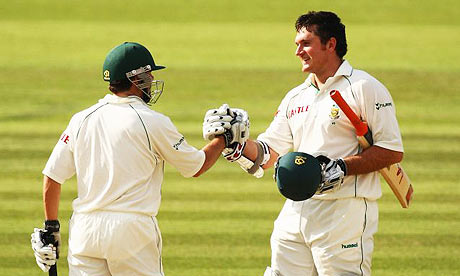 For the opening wicket, South African captain Graeme Smith and Neil McKenzie are the proud holders of the highest partnership ever of 415 runs.

Although it came against a weak Bangladeshi bowling attack, a record is a record. It was achieved in Chittagong in March 2008 and that partnership demoralized the hosts so much so that they capitulated to an innings and 205 runs defeat as South Africa won both Tests of the 2 Test series.

McKenzie was dismissed for 226 eventually while Smith top-scored with 232 and deservingly winning the man-of-the-match award. 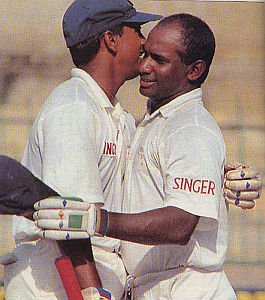 At one point time, this partnership was the world record for being the highest for any wicket of 576 runs.

Sanath Jayasuriya and Roshan Mahanama decided to grind the Indians in a Test match at the Rangiri Premadasa Stadium (RPS) in Colombo in 1997.

India batted first, and reached 537 with captain Sachin Tendulkar getting 143.

It was one of the flattest batting decks and the hosts decided to make full use of it. So much use that they ended up with a gigantic 952 for 6 declared courtesy this partnership between Jayasuriya and Mahanama.

The total is a record for the highest team score ever in an innings.

Jayasuriya went on to score 340, which is his highest score till date in Tests while Mahanama, who is now a popular ICC match referee scored 225.

This is the highest partnership for any wicket and not just the 3rd wicket. And this involves Sri Lanka’s current batting bulwarks, Kumar Sangakkara and Mahela Jayawardene who will definitely talk about this partnership to their grandchildren.

This was even more special as it came against South Africa, one of the top Test teams in the world at the Sinhalese Sports Club (SSC) ground in Colombo in 2006.

South Africa batted first but the Sri Lanka’s bowlers made life easier for the batsmen by bowling the visitors out for a paltry 169.

This pitch though was extremely batting-friendly yet South Africa had them at 14/2. But Sanga and Jayawardene had other ideas and outbatted the Africans as Sangakkara scored his highest runs till date in an innings, 287 while Jayawardene scored a marathon 374, being agonizingly 26 runs short of Lara’s record 400. 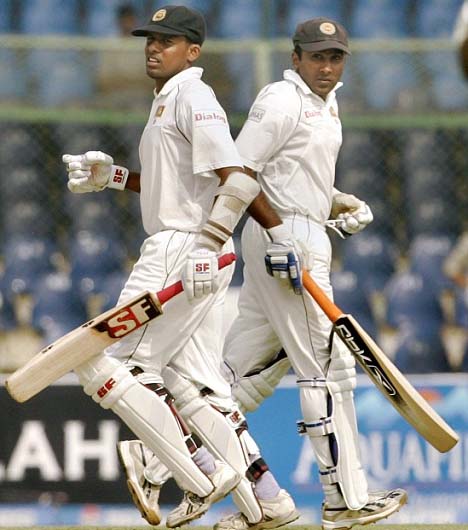 Mahela Jayawardene is such a classy Test batsman that he has been involved interestingly in another record partnership and this time it is for the fourth wicket. But his partner is not Sangakkara, it is the gritty Thilan Samaraweera.

Mahela Jayawardene and Thilan Samaraweera shared a 437 run partnership against Pakistan at Karachi in 2009. Mahela was the captain of Sri Lanka in this game and he played a typical captain’s knock of 240 while Samaraweera more than ably supported him with a 231 as Sri Lanka hit a monumental 644 for 7 declared which gave them enough time to bowl to Pakistan.

But the hosts had batting plans of their own and executed them to perfection. They ended with 765 for 6 declared and left Sri Lanka to bat out doggedly for the draw.

This partnership unfortunately would not be remembered the most for this reason and not to mention the terrorist attacks that had taken place a few days later in Lahore, where the Sri Lankan cricketers were targeted.

Sydney Barnes and the legendary Sir Don Bradman put together a 405-run partnership and more crucially, in an Ashes Test at the Sydney Cricket Ground in 1946.

England were bowled out for 255, batting first. This gave enough time to the Aussies to put up a substantial score. Barnes, the opening batsman and Bradman, the captain shockingly batting at No.6 put up identical scores of 234 as Australia eventually declared at 659 for 8, leaving England a deficit of a huge 404 runs.

Australia won by an innings and 23 runs and went 2-0 up in the series with three to play.

Sri Lanka has its name all over records in terms of partnerships. And this is Mahela Jayawardene’s third appearance in this list.

And again, there is a change in partner as it is the wicketkeeper-batsman Prasanna Jayawardene who joined him in putting up a massive partnership of 351 against India at Ahmedabad in November 2009. Both the Jayawardenes decided to add salt to the Indian bowling wounds and this was another characteristically highway Motera pitch.

Mahela went to score yet another double ton in his career, ending with 275 while Prasanna remained unbeaten on 154 as Sangakkara declared the Sri Lankan innings at 760 for 7 in reply to India’s 426 in the first innings.

Fortunately for India, Sachin Tendulkar scored a hundred in the second innings to make sure the match was drawn.

This is an unusual record as the two cricketers involved in it are names which are completely unheard of.

The highest partnership has been of 347 runs and it was against Australia at Barbados back in May 1955. Again it is the team’s captain who is a part of the partnership and it is West Indies’ Denis Atkinson. And the wicketkeeper-batsman Clairemont Depeiaza was his partner. From 147 for 6 in the first innings, West Indies were all out for 510. That was incredible batting to assure them an unlikely draw against a mighty Australian side.

332 runs is the highest partnership made for this wicket and the two men featuring in this are the English duo of Jonathan Trott and Stuart Broad.

The record was achieved at Lords against Pakistan in 2010. England were reeling at 102/7 when Broad came out to join Trott. This partnership is by far one of the finest counterattacks ever seen in Tests with Broad going out to hit his highest Test score of 169, while Trott ended on 184.

England went on win this Test match and take the series 3-1, but this Test is tainted due to the spot-fixing controversy that the then Pakistan skipper Salman Butt, Mohammad Amir and Mohammad Asif were embroiled in. So it remains to be seen if the events of play after England being 102/7 were credible or not and as a result, this partnership was forgotten in a jiffy.

This is understandably a low number, but it was a terrific partnership.

Mark Boucher, the South African wicket-keeper batsman and Pat Symcox added 195 runs for the ninth wicket against Pakistan at Johannesburg in February 1998. This partnership is different in the sense that Symcox went on to score a rare century batting at No.10 and contributed more in the partnership while Boucher was eventually dismissed for 78.

But Pakistan scored 329 in response to South Africa’s 366 and South Africa ended at 44/0 in the second innings as rain played spoilsport in what could have been a match with a result as South Africa and Pakistan were equally matched in the series.

For the final wicket, this is a unique record shared by New Zealand and Pakistan.

The New Zealand pair of Brian Hastings and Richard Collinge scored 151 runs between them against Pakistan at Christchurch in 1973 and took the first innings total to 402, which was ironically Pakistan’s score as well in the first innings. Unfortunately for the Kiwis, the match ended in a draw and Pakistan won the Test series 1-0.

While Pakistan had their chance for creating the world record in 1997 when they faced South Africa at Rawalpindi.

The all-rounder Azhar Mahmood and spinner Mushtaq Ahmed were also the cause of a 151 run partnership for the last wicket as Mahmood went on to remain not out on 128 while Mushtaq scored a rare half century as Pakistan finished at 456 all out. South Africa went on to bat well to reach 403 but the match was drawn with two Tests still to play.